Chamomile (Matricaria Chamomilla) contains apigenin, which is a bioflavanoid that has shown to exert an anxiety reducing effect as well as a sedative effect in higher doses.

Lemon Balm (Melissa officinalis)is an herb that has traditionally been used for a range of cognitive purposes, most centered on improving cognition and lessening stress and anxiety.

L-Theanine, which is an amino acid found in green tea, known to reduce over-stimulation without sedation and vitamin B6, which is an essential cofactor in the conversion from glutamate to GABA and 5-HTP to Serotonin.

Passion Flower (Passiflora Incarnata) Anxiolytic effects are thought to occur the modulation of gamma-aminobutyric acid (GABA) and considered to be a benzodiazepine partial agonist. (Wolfman at el., 1994).

Valerian’s main usage is to relieve anxiety or help you fall asleep. Although the exact mechanism of action for Valerian remain unknown, it is believed to enhance the signaling of the primary inhibitory neurotransmitters in the brain, gamma-aminobutyric acid (GABA), necessary for feeling calm and also regulating the activity of excitatory neurotransmission.

Finally, Restaze PM also contains 5-HTP, an inhibitory neurotransmitter in the brain and a precursor to melatonin, which helps regulate the sleep-wake cycle, while promoting restful sleep. Restaze PM also contains stronger GABA support per capsule than Restaze, specifically designed to promote sleep by supporting calming neurotransmitters and hormones, without the negative side effects of certain medications.

Use under supervision of a licensed healthcare professional and consult your healthcare practitioner before taking with sedatives, if you are pregnant, or nursing.

Restaze PM is specifically recommended to address symptoms of insomnia by supporting healthy GABA levels, the neurotransmitters (serotonin), and the hormone (melatonin), involved in sleep. It is also commonly recommended for patients with high levels of glutamate, PEA, and may be beneficial in some cases, in individuals with elevated levels of epinephrine and norepinephrine. * 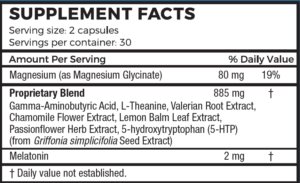